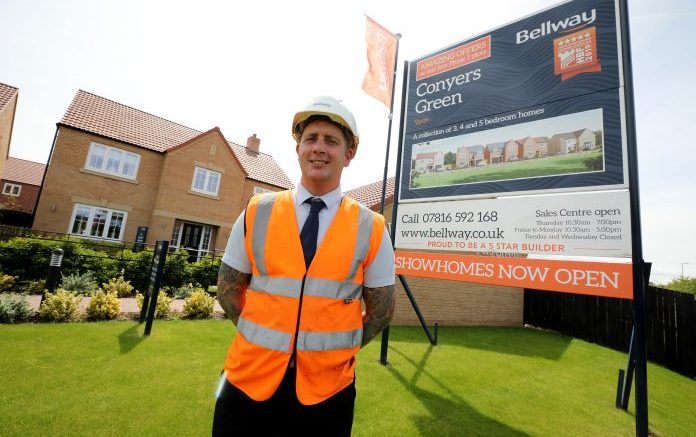 Two site managers who are overseeing the construction of new homes in Teesside have secured top industry awards.

Steven Taylor (44) and James Maidens (61), who work for Bellway’s Durham division, are two of just 17 site managers in the North East region to achieve a Seal of Excellence in this year’s National House Building Council (NHBC) Pride in the Job Awards.

Steven is site manager of Bellway’s Conyers Green development in Yarm, while James is in charge of construction at the housebuilder’s Regency Manor in Wynyard.
The winning site managers were announced on Friday 16 October at the NHBC’s North East regional awards ceremony, which was streamed virtually due to Covid-19 restrictions.

The Seal of Excellence Award is given to select finalists who achieved a Pride in the Job Quality Award in June. The award recognises site managers who provide new homes of outstanding quality and is considered to be among the most prestigious accolades within the housebuilding industry.

Steven has received three NHBC Pride in the Job awards throughout his career, including two while working for Bellway at Conyers Green. This is his first Seal of Excellence.

Steven said: “This year’s awards ceremony was very different from what we’re used to. It ended up being just me and a small group of colleagues watching the stream from head office while social distancing.

“There was lots of suspense in the build-up watching the ceremony, as I was the final winner to be announced. I couldn’t believe it when I heard my name – the team all celebrated and were very proud of me.

“It’s been a huge positive thing to happen in a very tough year, as not only have we had to adapt to new measures due to the pandemic, but I also lost my mum just under two months ago.

“I have come a long way since the start of my career, as I started out as a general labourer. It’s been a difficult journey working my way up, but it really has been worth all the hard work.

“One of the biggest challenges we’ve had to face during the pandemic has been organising and restructuring. As our biggest priority is to keep our customers safe, we have all worked very hard to come up with a reliable system so that those who are visiting can feel safe and comfortable.

“I think one of the most important duties of a site manager is being able to inspire your team to achieve the best results.”

James, who has worked for Bellway for three years, has secured many awards in his 47-year career in the industry. This is his second Seal of Excellence.

James said: “Winning a Seal of Excellence award means a great deal to me, as it is an honour which shows that we are able to provide a very high standard of service at Bellway.

“For those who are starting out in the industry, I would say you have to keep pushing to achieve the best results in your career.

“I believe the reason for Regency Manor’s success is down to the dedicated team on site, who are all working hard to provide homes of outstanding quality and to maintain our status as a five-star builder.

“The team has managed to adapt to a new one-way system very well, too, and we have worked hard to ensure a safe new system is in place with the Covid-19 guidelines.”

Rob Mitchell, Construction Manager for Bellway Durham, said: “I am extremely proud of both Steve and James for their perseverance and dedication to their work during these challenging times. Their award wins are a true reflection of the outstanding customer service and quality of construction they have been able to provide while directing the teams at their developments.”

For more information on the new homes being built by Bellway Durham, visit bellway.co.uk.

More information on careers at Bellway can be found at bellwaycareers.co.uk.

THE Covid infection rate across the majority of County Durham is showing a downwards trend – but some areas have seen a rise in the past week. The Northern Echo | Durham …

A MAN, apparently well thought of in the community, has lost his previous respected reputation after being convicted of historic sex offences. The Northern Echo | Durham …

Richard Holden, Member of Parliament for North West Durham, has today taken Committee Stage for the Prisons (Substance Testing) Bill through the House Of Commons. If passed, the Bill will mean that so-called “psychoactive substances” will be easier to crack down on illegal drug use in prisons. Without the provisions in this Bill, the prison […]
The post A Critical Prison Private Members Bill Led By Richard Holden Through Committee Stage appeared first on Durham Magazine – Durham Deserves Good News. Durham Magazine…

MENTAL health campaigners have expressed concern about the “mental health time bomb” that could cause a “winter of discontent”. The Northern Echo | Durham …

Richard Holden, Member of Parliament for North West Durham, joined forces with Conservative MPs Dehenna Davison, MP for Bishop Auckland, and Paul Howell, MP for Sedgefield, to promote County Durham in the Houses of Parliament. Richard has been campaigning to get more locally produced food onto the menus in Parliament and more food from across […]
The post Richard Holden Wins Campaign To Add More Local Produce On Parliament’s Menu appeared first on Durham Magazine – Durham Deserves Good News. Durham Magazine…