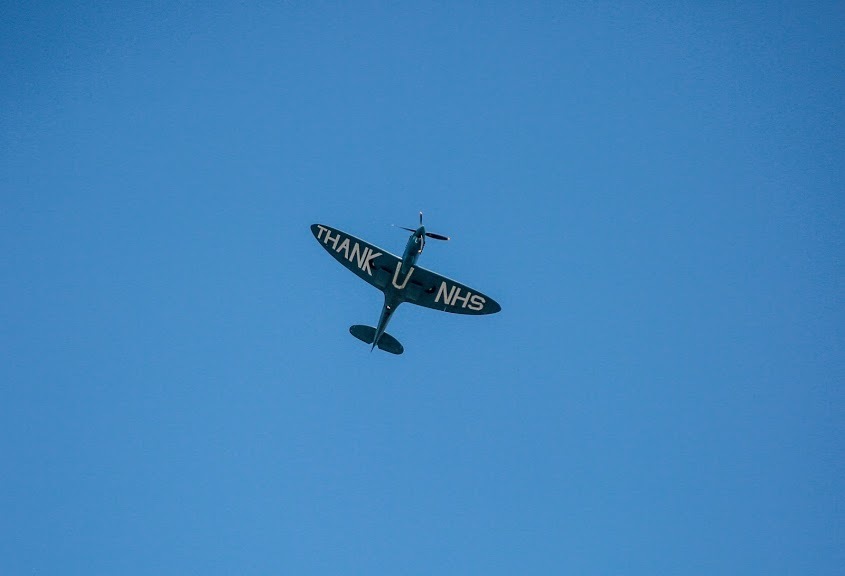 AN historic Second World War Spitfire decorated with tributes and messages of thanks to NHS workers flew across Northern England hospitals yesterday.

The blue Spitfire PL983 ‘L’ flew from Duxford Airfield over hospitals across Northern England including Harrogate, Friarage, Darlington, stopping at Teesside Airport and then flying across North Tees Hospital, James Cook, Hartlepool, across to Durham and up to Sunderland and Newcastle.

Shirley Gibson, a member of the public, from Darlington who came to watch the spitfire, said: “I think it’s absolutely fantastic. The NHS has been fantastic. It’s a lovely way to say thank you. It was really nice that they circled round a lot of times it gave people time to take pictures.”

Robin Ellwood, from Darlington, said: “The reason why I’m here is because my uncle was in the airforce after the war. It’s brilliant. I’ve been in quite a few hospitals because I got injured in the airforce. It’s a good idea.”

Graydon Bowes, from Darlington, said: “It’s a fantastic idea, especially for the Battle of Britain and the NHS.”

Mark Boanson, from Darlington said: “I think it’s a fantastic idea. I don’t know how many places are left but it’s a good experience, and it’s good for the National Health Service.”

Tees Valley Mayor Ben Houchen said: “I am delighted that Teesside Airport has been able to welcome this historic and unique NHS Spitfire as part of its journey across Northern England. It is a brilliant idea and I’m sure people right across the North-East will have been trying to get a glimpse of the plane in the skies today.”

A spokesperson for County Durham and Darlington NHS Foundation Trust, said: “We’re so grateful to the organisers for including two of our hospitals in their national tour. Lots of local people came along to catch a glimpse of the 80 year old plane, particularly poignant at Darlington Memorial Hospital which takes its name from, and is home to, the town’s war memorial. It’s great for our hardworking staff to be appreciated like this, especially when it’s all in aid of NHS Charities Together.”

A South Tees Hospitals NHS Foundation Trust spokesperson said: “It was fantastic to watch the NHS Spitfire fly over our hospitals. The flypast was a great way of saying thank you to our dedicated staff who have worked tirelessly during the coronavirus pandemic.” 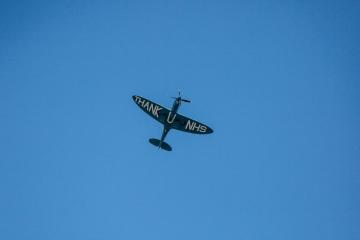 MORE snow and ice may cause travel disruption tonight and early Saturday across North Yorkshire and County Durham. The Northern Echo | Durham …

A Bosnian refugee who fled persecution will speak about the most difficult period in his life, when he shares his story of struggle and survival to commemorate Holocaust Memorial Day. The moving talk will form part of Durham County Council’s annual events to remember the victims of genocides throughout the world. International Holocaust Memorial Day […]
The post A Bosnian Refugee To Speak On Struggle And Survival During Genocide appeared first on Durham Magazine – Durham Deserves Good News. Durham Magazine…

Keyworkers caring for some of County Durham’s most vulnerable residents have begun to receive their Covid-19 vaccines at a new dedicated centre. This week, a vaccination centre opened at County Hall in Durham City to vaccinate frontline social care workers, including those employed by Durham County Council, the NHS and the independent sector. The centre […]
The post A Sigh Of Hope As Covid-19 Vaccines Start To Be Distributed appeared first on Durham Magazine – Durham Deserves Good News. Durham Magazine…