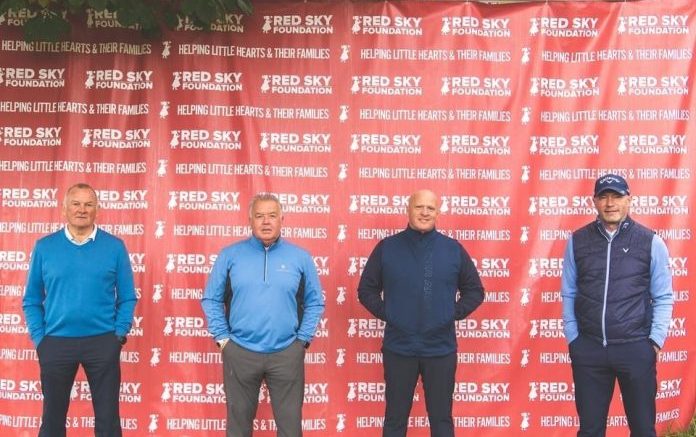 A socially distanced golf tournament has raised more than £12,000 for a leading North East charity.

Players turned out in force at Ramside Hall Hotel, Golf and Spa near Durham for the Red Sky Golf Classic, in aid of the Red Sky Foundation.

The event was held on world #Restartaheart Day, which was marked by the North East Ambulance Service demonstrating CPR and how to use a defibrillator before the competition – a timely boost to the charity which raises money to help support coronary care services across the region.

Ensuring the event met strict Covid secure guidelines, the competition was organised by Red Sky Foundation founder, Sergio Petrucci and raised funds to fulfil the charity’s working objectives to provide continued support, machines and equipment for the Children’s Heart Unit at Newcastle’s Freeman hospital, along with running a campaign to place more defibrillators in communities, schools and city centres across the North East.

Melissa Coutts, Managing Director of Recruitrite UK, which was the headline sponsor of the event, said it was a pleasure to support such a worthwhile cause.

“We’ve been involved with the Red Sky Foundation for quite some time now and we jumped at the chance of supporting their efforts this year, the work the charity does to support heart heroes across the region is incredible especially during this pandemic,” she said.

“We’re just delighted to partner with them and give the boost they need to help fix little hearts.”

Sergio added: “It’s a very hard time for most charities at the moment because so many fund-raising events have had to be cancelled.

“So it was fantastic that we found a way to make this work, and still give supporters a true taste of the Red Sky experience which has become so popular over the years.

“We’re always so grateful to get such incredible support, which allows us to continue with our mission to help save the lives of babies, children and adults across the North East who need coronary care.

“We want to send out a huge thank you to all of our sponsors and to everyone who took part and made the day such a fantastic success.”

Since its launch in 2016 by Sergio and his wife Emma, who planned a one-off fund-raising event to say thank you to the hospital unit which saved their daughter’s life, the Red Sky Foundation has gone from strength to strength.

The charity has raised hundreds of thousands of pounds to buy vital equipment for the Freeman Hospital, along with numerous defibrillators placed in towns and city centres across the region.

It also purchased a unique organ care transplant system for the Freeman Hospital and helped to fund a specialist Fontan nurse post in the region, the first of its kind in the UK.

For further information on getting involved with the Red Sky Foundation, visit www.redskyfoundation.com

A FACEBOOK group has been created to raise awareness to the council of how ‘unhappy’ residents have become with the condition of their town and the local surrounding areas. The Northern Echo | Durham …

AN unqualified builder who set up his own company soon found himself out of his depth to the cost of customers he defrauded out of thousands of pounds. The Northern Echo | Durham …