Stephen Suddes could quite easily be referring to life in the North-East 12 months ago, when coronavirus arrived in our region and changed our way of life, possibly forever.

But he isn’t. He is looking back at another epidemic – this one now 20 years ago – that also sent shockwaves across the country and changed everything overnight.

“We were one of the first to get hit by foot and mouth”, says Stephen, a farmer from Tow Law.

“We lost everything; all our livestock had to be slaughtered. The Foot and Mouth arrived in February and by the middle of March everything was gone.

“From then on, we joined other slaughter teams on farms in the area, putting the pens up. There was a lot of protests by residents up in Tow Law, but I don’t think they understood why we were burying and burning them, most didn’t like the smell. Neither did we, but they had to be buried somewhere.”

Foot and mouth swept across the UK in February 2001. More than six million animals across Britain were slaughtered. Cumbria was the most heavily affected with farms from Alston nearly being wiped out. It cost almost £8 billion to the UK agricultural industry.

Stephen’s daughter Stacey said was very young at the time, but she can still remember the smell and devastation of the “crazy time”.

“There was a lot of protesters up here, but grandad buried his sheep and cattle on the farm.

“It was always on the news, we got sick of it, we just wanted it all to end.

“Eventually it did and we managed to pick ourselves up and keep going. It’s something to look back on and think, we made it out so we can make it out of Covid.”

Many parts of the countryside were closed off to prevent the spread of the virus. Farmers practically isolated themselves and their farms for weeks.

There was little defence against it other than to close off and isolate areas of infection. Many lived cut off from the rest of the world, with some farmers spraying down vehicles visiting the farm, such as postal vans and tractors.

Hill farmer Gregg Dalton said: “There was a lot of isolation in those dark days but it probably made it easier to control the virus but it made a lot of aspects of the job difficult.

“Back during foot and mouth there was a lot of isolation on farms and many saw a lifetimes work wiped out within 24 hours which caused a lot of heartache.

“A lot of farms that were not directly affected had livestock that they could not sell. They were given just small amounts of money from the government to keep them going.”

Foot and Mouth could be fatal to cloven hoofed farm animals, such as cows, sheep, goats and pigs. The infection leads to blisters on the feet and mouth of the affected animal, causing severe pain and stress for the animal until it has to be put down. It does not affect humans, although they can carry the virus and spread it.

It was quick to spread and scientists at the time had a difficult job of tracking the infection. The virus could be spread by anything from on the shoes worn by walkers, tyres on a car, or in the breath of an infected host.

Anita Atkinson who lives on a farm at Harperley said: “All the sheep had to be slaughtered.

“We had a vet come over from Australia to do it, there were vets from all over the world coming to help.

“The sheep around the dale are allowed to wander across the moors and farmers were worried that this could mean a cross contamination and they would lose their flock. 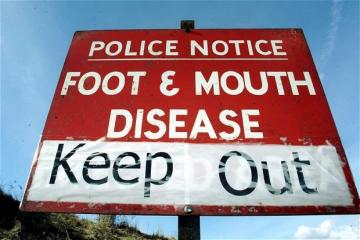