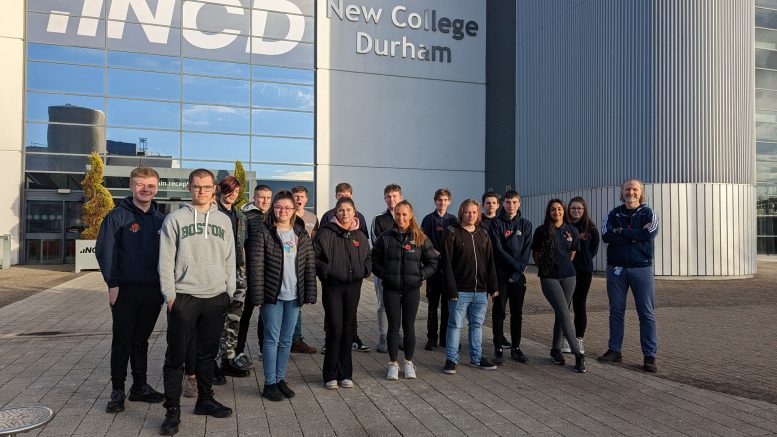 Since the start of the school year in September, New College Durham‘s students have demonstrated remarkable generosity by raising a total of £20,000 for charity. Additionally, they are continuing to show their altruism by collecting items for those in need in their local community during the festive season.

In November, the Uniformed and Public Service students spent two weeks fundraising at Sainsbury’s and Marks and Spencer at the Arnison Centre, Durham and sold poppies in the college at lunchtimes. Their hard work paid off as they collected a massive £18,000 for the Royal British Legion Poppy Appeal.

The fabrication and welding and engineering students also supported the Royal British Legion Poppy Appeal. The talented students used skills they have learnt at college to create metal soldier silhouettes, tea light holders and clocks. The items were sold to staff and students and made £700 for the charity.

Children in Need was the charity of choice for the early years and beauty students. The groups ran a fun event which included peddle for Pudsey, Pudsey ping pong, photo booths, raffles and cakes sales raised £654 for the children’s charity.

Several other national charities have benefited from New College Durham’s generous students. Health and Social care students took part in Elf Day to raise money for the Alzheimer’s Society and joined in with Christmas Jumper Day to raise funds for Save the Children. Travel and Tourism and Business students held a Christmas market in aid of Marie Curie and If U Care Share.

New College Durham also works to support the local community. Students across the college have arranged a series of collections to help local people who may be struggling this Christmas.

Foundation Studies Art and Design students are collecting donations in support of the Durham based charity, Sanctuary 21. They have designed and made cards and gift bags which will be filled with practical gifts then presented to Sanctuary 21 service users following their Christmas meal, provided by the Salvation Army, on Christmas Day. The Preparing for Independence students raised £330 at their Christmas Fayre to contribute to the donations.

Advanced manufacturing students have been collecting toiletries for the ‘help stop hygiene poverty’ campaign and T-Level Health students are gathering donations of food and gifts for the women’s refuge. The Students’ Union organised a collection for Durham Food Bank and The English Language Centre students helped out by giving their time as volunteer workers. The college is also ran its annual Christmas toy appeal as part of Metro Radio’s Mission Christmas initiative which aims to provide disadvantaged children across the North East with gifts at Christmas.

“We are extremely proud of the amazing work our students do to raise money for national charities and support local initiatives. The students choose which causes they want to help and come up with fundraising ideas. It is great to see them use the skills they are learning at college to improve the lives of others.”

Budding actors set to star in Brassed Off at Gala Durham