A COUNTY Durham village has been “blighted” by human faeces and drivers urinating in public following the opening of Amazon’s latest warehouse nearby.

Residents living in Tursdale, near the Integra 61 industrial estate, say they have been left “angry and disgusted” following months of hauliers serving Amazon Durham using the village as a makeshift rest stop.

Amazon has since said it is taking the matter seriously and is reminding all of its hauliers to follow its guidelines.

Speaking to The Northern Echo, residents claim drivers are routinely seen urinating in public, while human waste and toilet paper is regularly strewn on the village’s bus turning circle and in the adjacent field.

One resident, who has lived in Tursdale for the past twelve years, said up to five lorries park in the bus circle “at all times of the day and night” despite signage asking drivers to keep the area clear.

Residents say they recently discovered waste being thrown into the field Picture: CONTRIBUTOR

Deirdre Pattison said residents felt “completely let down” by the online retailer after they were promised the warehouse would not “make much of a difference to their lives” before being built.

But raising concerns, she said: “Before Amazon we had never had any issues with anyone parking there, but in the last few months we have seen so many trucks double-parking, parking on the verge itself, or blocking the road.

“It’s nigh on impossible to get onto the road, when leaving the village, without risking a crash as they are sometimes blocking it completely so you can’t see.”

Ms Pattison, who has reported the issue of illegal parking to both Durham County Council and Amazon on a number of occasions, said villagers were growing increasingly concerned over the environmental impact from the use of drivers.

She said: “Only last week we discovered that poo is being thrown into the field – all this waste carries a lot of disease, it goes septic if left. We’re concerned about anyone walking their dog as it could kill them.”

Tim Robinson, whose parents live in the village, captured the moment a haulier driver was caught urinating in broad daylight.

Mr Robinson, who lives in Bowburn, said: “My parents and the village are seeing more and more human excrement with toilet paper – it’s disgusting. Everyone in the village is angry, frustrated and disappointed.” 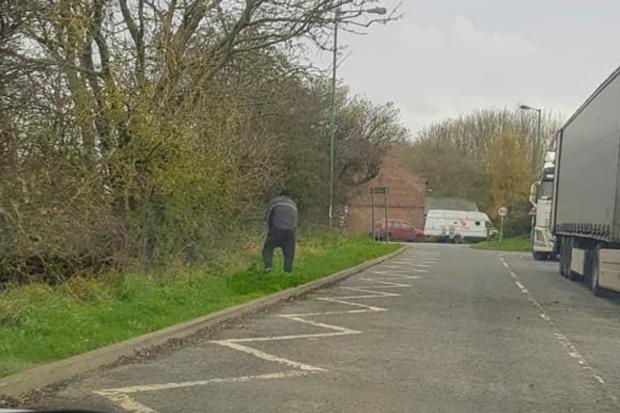 Mr Robinson said he believed the problem is down to the fact Amazon do not have enough space on the site, which he said should have been resolved when they lodged plans with Durham County Council to build it.

He said: “There’s no lorry park here, the only nearby one can only accommodate 15 HGV’s and there’s a charge so they come here and park up instead.

“It’s just so disrespectful to take over a massive site and develop, as far as I’m concerned, they developed it for themselves and didn’t think of anybody else.

“They knew there isn’t the capacity in the area to handle that many HGV’s coming through.”

Residents say up to five trucks park in this part of the village on a night Picture: CONTRIBUTOR

Responding to the concerns Dave Wafer, interim head of transport and contract services at Durham County Council, said: “When considering planning applications, our planning committee considers a range of factors, including the benefits a scheme will bring to the area in terms of job creation and any potential impact on the local community.

“In this case, the committee was satisfied that the investment in a significant change to the local road network was sufficient to mitigate any potential traffic issues at the site.

“We are aware of Tursdale residents’ concerns about vehicles parking in the bus turning circle and are considering options as to how this can be addressed.

“We are concerned about the recent reports of anti-social behaviour and work closely with Durham Constabulary to tackle such issues across the county. We would encourage people to report any incidents to either Durham Constabulary by calling 101 or ourselves on 03000 260000 or online at www.durham.gov.uk/asb.”

Meanwhile, a spokesperson for Amazon said it took the concerns raised by residents in Tursdale “very seriously.”

‘Amazon MME2’ is located less than a mile from Tursdale Picture: SARAH CALDECOTT

They said: “Amazon strives to be a good neighbour and we take this matter very seriously.

“Any disruption caused by drivers does not reflect the high standards we have for our carrier partners and their drivers.

“We have informed our carrier partners about the concerns raised and continue to reinforce and remind them of the correct driver behaviour guidelines.

“We expect all of our carriers to comply with these guidelines.”